When you become a Red Sox fan…you don’t just do it half-way….it’s with your heart, soul and mind. It shows in your daily life, your job, your clothes, your home, EVERYTHING…it may take awhile for you to realize how much love you have in your heart for them….but you have this moment when it hits you….you are not just a fan of this team…The Team IS Your Family!!

That moment came today as I sat in my doctors’ office waiting to have my cast put on. I was giddy as a schoolgirl in her first crush as I watched him put on the RED cast. Yes…I said RED CAST. Ya see…my doctor found out that I was a huge fan and suggested we put on RED to which I replied with a gleeful look, “YOU CAN DO THAT??!!” He smiled. Well not to be outdone…I went home and searched till I found them, the temporary tattoos I found at Spring Training last year. And so I disobeyed the Doc…using a small amount of water I put the Boston Red Sox tat on the front. It looks real nice. I’m heading to spring training this week and hope this cast will assist me in getting autographs. You see….Manny isn’t the only one who can be goofy.
Posted by Tex at 8:24 PM 10 comments:

I want you to take a good long hard look at this picture and tell me what you see....do those fans act like they are yelling at Manny for causing so much trouble?? HELL NO!!! They are just happy he HAS ARRIVED!! It never ceases to amaze me how the media focuses in on "the player" who can give them the most to write about...and I'm not talking about stats....I mean the "Manny-Rama" !!!

Manny heads out to participate in drills with his teammates and somehow takes a wrong turn???? Wait....I mean this isn't Manny's first trip to this park...doesn't he know the way to the field??? Manny cracks me up!! He is such a trip to watch and one of my sistahs off SoxSistahs Blog made the right analogy over on SurvivingGrady today: "It must piss HIM off that he's like they kid who doesn't have to study EVER and still gets all As."

Manny makes baseball look effortless...and THAT is the beauty of him playing. He knocks it out of the park, jogs around the bases then takes his place in leftfield....laughing with the fans, taking a leak behind The Monster, or picking the flowers (you remember the kid in T-Ball?). That is why I love Manny because he loves the game and the game loves him back....it's not that he lacks respect for the team or the game....he just wants to play baseball....ya know, catch the ball, throw the ball, and hit the ball...HIT IT REAL HARD!!!!

Short post tonight as I'll be going into my surgery in the early morning for repair to my thumb. I'd post here what really happened but then the secret would be out. So instead I'll tell you "a story" of how I hurt my thumb.

So I'm sitting at this bar minding my own bees wax and all when this chick comes up to me asking if I got a light for her cig. I tell her no, I don't smoke those nasty things. She took offense to my comment and called me a choice word. I sneered at her and told her "it takes one to know one". Yeah I know, Real Mature(even in my stories, Im a smart ass). So I tell her she could probably light her cig from all the hot air coming out of her mouth. She doesn't like this comment either and begins berating me for my tattoo. WELL....ya know you can call me alot of things but do NOT talk about my tat. That tat was designed with love and care and devotion for 2 of the 3 things I love most, my state and my Sox. (the 3rd is my family) I stood up at this time and it was then I realized she was about a foot taller than I was (which isn't saying much since I'm only 5'2") So I stood on my chair to look her in the eye.

The waitress didn't know what to do cos she was this frail bony frame who looked like she'd seen some gangstah out of L.A. I shoved Mizz NastySmoker into the next table and jumped down from the chair before she could knock it out from underneath me. Well the gals at that table weren't too happy with all this as their precious fruity drinks were spilled all over the floor. So now I had 4 pissed off chicks at me. Then the bouncer came over and said I had to go...which was fine cos I was through drinking anyway. I headed to the door and just for shits and giggles, I shoved one of the fruity drinkers aside. She fell which caused one of the other ones to fall.....well Mr Bouncer wasn't laughing and grabbed me saying he was gonna have to call the POlice. I disagreed with this choice but he declared his Authoritie and held my arm very tight. So with all my texas might with my left hand I sucker punched him...well I tried but my hand hit the door and jammed my thumb.

What? you don't believe me??? you don't think I'd have the nerve?? or that Im not a smartass enough?? Well that story is better than the truth.
Posted by Tex at 11:10 PM 10 comments:

The 3 Little Words that makes my heart flutter.. 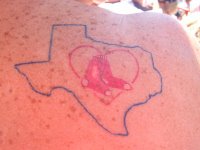 Its Valentines Day with love in the air and flowers being delivered everywhere. Lovers holding hands, stealing kisses and marriage proposals. Red roses will be abundant in tall vases to those who are in love. FTD and Hallmark must make a mint on this holiday....Godiva and local candy shops selling the latest craze of chocolate covered strawberries YUMMMY! Let alone the jewelry stores selling diamonds by the pound. With all this frenzy of hearts and love......

All I could think about was Truck Day. Don't you think it's odd that Truck Day falls so close to Valentine's Day? It's about the love of our Sox! My heart flutters at the thought of Tek catching Dice-K! Hearing about Lester back in Ft. Myers already? The boy has got True Grit!
Many new faces but the same numbers on the backs will be strange to see but it's a new team this year, that's for sure.

While other girls will be admiring their flowers, chocolate and jewelry, I'll just be anticipating Spring Training and the beginning of the 2007 season......The Year of the Dice.
Posted by Tex at 5:03 PM 7 comments:

Moving to Austin was part of going after my dreams and goals.....I had to leave behind my family in Orange. My granddaddy died when I was 16 yrs old during my senior year in high school. His brother, Vernon, sort of became that substitute for the grandfather figure in my life. My uncle Vernon passed away this Thursday almost unexpectedly. He had a heart attack recently but was doing fine. This man went to visit everyone all the time. He was driving around town up until he had the heart attack. This man was the kindest gentlest soul I've ever known. This man loved his family. He visited you when you were sick or in the hospital. He loved to drop by my parents home and have coffee. He will be missed...and that is an understatement.

One more death in my family that I wasn't there for....my feelings are mixed. I got to see Uncle Vernon every time I went home for a visit as he would visit my parents on Saturday mornings for coffee. I will miss him.
Posted by Tex at 4:51 PM 5 comments:

I felt the need to re post something I posted in my Sox Sistahs Blog. With the beginning of a new season and my latest tshirt coming from josh's line of clothing, I feel compelled to explain it all.

The one question I get asked when people find out I am a Red Sox fan and a born and raised Texan: Why? Why the Red Sox? Where’s the connection? What about the Astros or the Rangers? Where’s your loyalty to your own state’s team? So I tell them…you want to blame someone or something…blame Roger…blame Roger Clemens and blame the passion of the Red Sox Nation.

In a state where Football is God…I became a baseball fan. I am not sure if it came about when I rode my bike to the Little League ball field to watch my friends play or because of the high school ballplayers in their tight white pants. Perhaps it was because I became enthralled with the way a ball came across the plate where a wooden bat connected and whacked it hard over the pitcher and shortstop, falling short of the centerfielder, while watching the batter haul ass around the bases trying to make a triple. Maybe it was how the catcher “sits” behind the plate calling the pitches, while the runner on 1st tries to steal 2nd. Or just that I enjoyed the sound of the ‘thump’ of the ball hitting the catcher’s mitt from a fastball pitched. It really doesn’t matter because at some point in my younger life, I became an avid baseball fan.
Diamonds

They say diamonds are a girls’ best friend
Perfect in shape and form
brilliant color reflecting in the admirer's eyes.
Each one different than the next;
yet all bring the same feelings,
the same joy, the same smile
when a man steps up to the plate and
Finally says, "Play Ball!!"
I did follow the Astros, that is, until Roger. I attended Lamar University, a local college in Beaumont, Texas where the baseball program was as important, if not more important than the football program. (by the way, Lamar is the alma mater of Kevin Millar) Coach Jim Gilligan made it that way and still does today. Following baseball, I heard of a baseball phenom at UT, Roger Clemens. I followed Roger to the Red Sox and watched him succeed. So blame Roger…he is the reason I became a Red Sox fan. So now you ask, why didn’t you follow him to Toronto or to New York (gasp!)? Because after following Roger to Boston…I became a more avid fan of baseball but even more so…a fan of Red Sox baseball and became a part of the Red Sox Nation. How can you watch the BoSox fans and players and not get caught up into the passion of it all? One thing I learned was Boston loves the Red Sox.
Make no mistake, I am a Texan so unlike some in the Red Sox Nation in Massachusetts, I still love Roger and follow him from afar, wishing him well even when he was playing for the enemy. So there, that is my story of how a die hard born and raised Texan gal became a Red Sox fan. And if you want to judge my loyalty or whether I'm a die hard Red Sox fan..just ask any of my friends, they'll tell ya.
Signed,
Texan By Birth
Red Sox Fan by Choice
Posted by Tex at 9:45 AM 6 comments: