Thanks to my buddies over at Surviving Grady for this tidbit on Beckett's performance last night...so it gave me alittle inspiration to write about.

*Picture from Getty off of Yahoo Sports
So OK...I admit Beckett has not had a great season...but heck he's been on the DL most of it!!!!   But last night I was excited, anxious and alittle scared for Beckett.  But he delivered...for a while.  I have to say at the top of the 7th I was shocked Tito kept Beckett in (yah I know I shouldn't be).   I actually thought after that 2nd homerun hit off of Beckett, Tito should have pulled him.  But he didn't but thank God for Hitting. I know the saying "Pitching wins games" but a game isn't won by no Runs. But BACK to why I'm writing this...

With the addition of Beckett to the Sox back in '05, Boston added a few choice words to their vocabulary such as 'horseshit'.  Now Beckett is an intelligent Texas boy so don't let his lack of 'big words' fool you but sometimes those 4 letter words just make you feel better when you've had a shitty game/day.   Never one to mince words, when asked about his start, Beckett gave me giggles at his response:
"I don't have any words that aren't four letters," ....  "I started leaving some balls up."

Now if Beckett could just get his balls in gear and quit leaving them up to be hit....we'd all be happier.
And yes I'm choosing to use a picture of Beckett NOT getting a homerun hit off of him so THERE

And for all you Beckett Haters.....leave me be. I'm taking my smiles where I can get them.
Posted by Tex at 11:36 AM No comments:

It Ain't OVAH till It's OVAH

You pray and pray and hope that God answers your prayers to give you the answer you want.  Some of us 'pray' to the Gods of Baseball in hopes of making it to October Road with our team.   Some churches you pray on your knees, some do the cross thing with your hands, some kneel and bow, but in Baseball, we pray in all sorts of ways.

Then we may use another cultures means and methods in making sure our opponents go down a fiery death.... 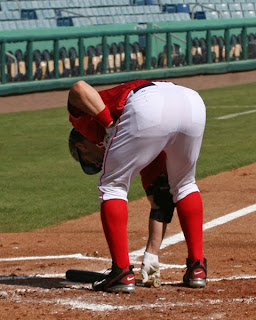 or sometimes we just get distracted from the game  itself...

Either Way...Baseball is a game where It Ain't OVAH till IT'S OVAH!!!

Imagine a World With Peace 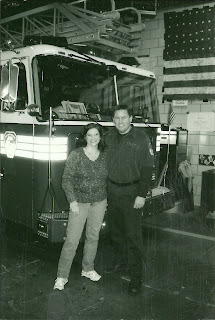 Lots of those remembering those who died on 9-11 due to terrorists. I chose and planned out to visit the firestation who lost the most men....the firefighter who greeted me was kind enough to take a picture with me.  I also visited Ground Zero...I can't explain the urgency I had to visit.  I felt compelled to do more than just be there.   The pictures of Ground Zero stay with me...I remember vividly the incident of teetering on a sawhorse trying to look over the mesh fence to see what I could see of Ground Zero....only to be yelled at by a local police officer to get down.  There were flower bunches hanging on this fence, some new...some old....but people were leaving their thank you's and sympathy behind.  As I tried to move across the sawhorse to get down....a firetruck came barreling down the street, watching it get closer, I became mesmerized and overcome...freezing in my steps I watched as they turned the corner. A firefighter half hanging out the window with a look of despair on his face.  Our eyes met and I nodded to him...he nodded back and the truck turned the corner heading towards Ground Zero....to find more bodies of those lost. 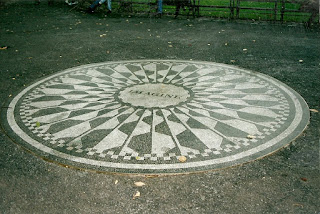 It was at that time I realized I was on Holy Ground...a cemetery of sorts and made my way off the sawhorse to the ground.  I think of that weekend often as it was the push I needed to move on....to do something and not become stagnate any longer in my life.  Since then, so much as changed in my life but once again, I feel the tug of What's Next.....I am making plans now to return to NYC next year.  It will be 10 years....10 years that some have been without their moms, their dads, their brothers, their sisters, their children, their friends....the memories of that day are etched into our minds...the pictures of the towers being hit and dropped....but the pictures we should be remembering are those who were lost and the good they left behind...
Posted by Tex at 3:08 PM 1 comment: