To lose patience is to lose the battle

It's almost May....we've only had one month of baseball. 22 games. 11-11.  We've got 5 more months and 140 games left.  Ghandi was a smart wise man who sought peace and freedom. He understood mountains couldn't be built in one day. He understood men couldn't tear down their walls of ignorance in one day. So he used patience as a weapon to win.  John Quincy Adams said "Patience and perseverance have a magical effect before which difficulties disappear and obstacles vanish."
The Lester we all knew was there finally arrived last night. The bullpen shined. Our last night in Canada and after two games that seemed like a struggle to win...last night we pushed through.

BELIEVE         FAITH
Two words we say quite often in the Red Sox Nation
Two words I've been saying as a Mom.
You see loving my team seems to follow the same path of the love I have for my only child, my son.  They do great things and I'm happy and delightful....then for no reason at all, they bomb and fall.  But I have this unconditional love for them. Sure I love my son much more...but it's truly unconditional.  He's done some things that I am totally against and never back him on....but I'm here still holding on to hope and faith that he'll come around.   Just like I do my Sox.
After over 10 years of floundering in the world and screwing up any chance of a future, my son is growing up.  Making better decisions to become a man and quit being that little boy.  It just took patience and perseverance.
Now about the Sox....we've seen 2 World Series Champions in the last 7 years.  TWO!!  Some Sox fans never saw any. So we should be thrilled but we keep saying "What have you done for me lately?"   It's tough to see the boys play so idiotic when we KNOW they have the ability.  Yah, I've felt that many times with my own son....but I just sat back and waited.  I knew in due time, in his own timing, it would come.

So Let's get behind our boys and root for them all the way to October!! Even Darnell McDonald understands with Tatted across his chest are the words:

Want to know what it looks like to be a hero of a Red Sox game?
His name is Darnell McDonald and NO he's not Irish.  Well, I really don't know if he is or not. But Darnell was born in Fort Collins, Colorado in 1978....same year my son was born.  He attended and graduated from Cherry Creek High School near Denver.  He had aspirations of college but was signed right out of high school...drafted by the O's and worked his way up through the minors to the majors.  While he was there, McDonald only hit .156 in 32 at bats (17 games).  YEP...that's it.  Next stop was the Indians....trouble followed and I don't feel it necessary to go there...He jumped around till he finally landed at the Red's and made his first home run in the majors last August....which leads us to this season when the Red Sox picked him up.

Yeah, the Rangers took our field by storm, stealing every base they could...making the Old Man look a fool...but the joke was on them when Darnell came to bat. (stole pic off of SG and have NO clue where they got it from..apologies to the photographer)
Posted by Tex at 4:26 PM 1 comment:

Beckett Finally Gets His Rocket On

So according to Hard Ball Talk and Masshole Sports, Beckett has finally "Put a Ring" on it.  Marriage.....it's not Rocket Science but can't hurt to marry one, I suppose.  Beckett  made it known his 'sports hero' was The Rocket growing up although I hope that has changed now with all his recent developments.  So I find it ironic that Beckett chooses a Rocket Scientist to marry. Is it just me?  or is the Rocket Scientist above sizing up Beckett's "rocket"?   You know...I'm sitting thinking perhaps this was a wise move on Beckett's part....finding someone who understands velocity, the study of movement and forces, the aerodynamics of how a ball is pitched through the air, and whizkid mathematics has to help them understand the 'Game of Baseball'.  I'd say Beckett showed he's alot smarter than some have given him credit for. (Snagged that pic of the two off of massholesports.com.)

So Holly Fisher is her name.  A few other Texas tidbits:
She's from Spring, Texas(same as Josh)
So this means she's from TEXAS!! GO JOSH!
Graduated from Spring High School 1999(Same as Josh) hmmmmmmmmmmm wonder if they dated??
Graduated from Embry-Riddle Aeronautical University with degree in Aeronautical Engineering in 2004
Got job at Boeing right out of college
Boeing is a global aerospace and defense aircraft manufactuer
Received her Masters of Science in Astronautical Engineering from U.S.C. all the while working at Boeing
Currently working as Space Engineering Consultant

Josh has made me dang proud...going after more than just a face, he's looking for that special someone who can help his ERA.

I'm just wondering when Holly will snag her first Buck at Josh's ranch.

The Pain is Killing Me 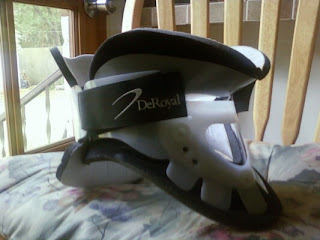 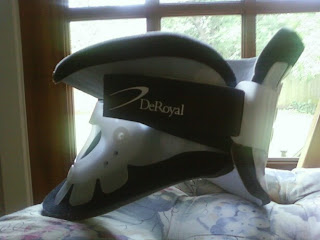 So I've been having some neck problems this past year.  It's gotten pretty bad and this January, the problems started affecting my right elbow and muscles. I was losing strength and it hurt to just lift my purse and I'm not one of those gals who has a suitcase for a purse.

So last Tuesday I let them cut my neck. I am not going to detail out the specifics but just know that these pictures are of the beautiful neck apparatus I am to wear over the next month or so. YEEEEEEEHAW.

I mean you would think they would have various colors for us girls. I mean I'm not a girly girl Ok well maybe I am alittle bit of a girly girl but not High Maintenance Girly Girl.  But even I would like to not look so dorky.

Oh and they give me drugs for the pain which has been extremely helpful...ya know for the pain but moreso for the baseball games of late of the Sox.  I mean, dont' get me wrong, I was elated to see Josh do so well Saturday and then to see the Captain knock it out of the park twice.

So forget about today's game...take a tylenol pm or if you got pain pills like me...Tomorrow's a new day. A new game.  The Twin's played their first game in their new park....so fine. Let's give it to them.

Now that we've got that out of the way, we can get on with the rest of season. We have 159 games left. One Hundred & Fifty Nine games. 1 5 9 Games. Sure the last three count...but so does the next 159. So we got the Yankee series out of the way and on to play the formidable Royals in Kansas City.  So we won Opening Day's...er I mean Opening Night's game...and then lost the next two. Did I mention we have 159 games left in the season?
EDIT
So I started this blog last night but wasn't feeling up to par to finish and NOW. We have 1 more loss with 158 games left.
Beckett is on the mound in Kansas City. Against Greinke, last years Cy Young Winner, Kansas City's lastest hero.
All I know is I want the Beckett who brings K's to show up and the team who bring Runs for us.
Not going to jinx...just plain and simple. 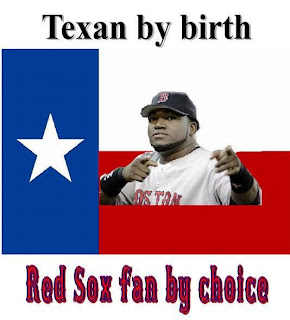 My good friend, Josh Blue, created this for me some time back...pretty much sums up who I am.  Anyone from the east coast who has met me, in person or on line (and Yes you can meet people on line and know them...sorta), KNOW that I am a Die Hard TEXAN through and through. I am proud of my state, although not always proud of those who live here.  Texas has the history background similar to New England. We fought to be separate from another nation and be ourselves. But I digress...Today is about Baseball.  I have several friends there tonight!!  Cyn, Kelly and Quinn that I know of. I'm sure there are others. But I can guarantee you with these three at the  game, there will be AWESOME pics and Stories to be told. Today is about Baseball....Baseball and ....
..............The RemDawg 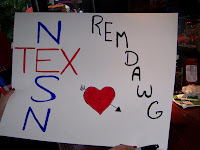 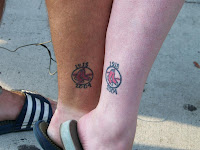 Fenway and the flag 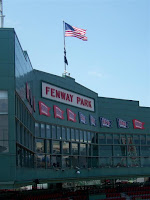 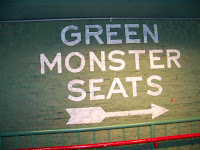 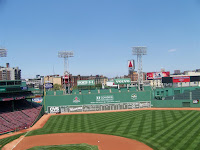 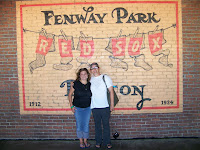 And last but not least....a friend of the past who we hope return this year 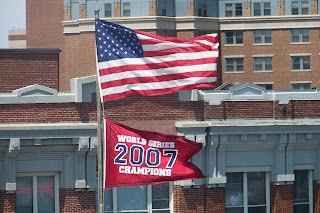