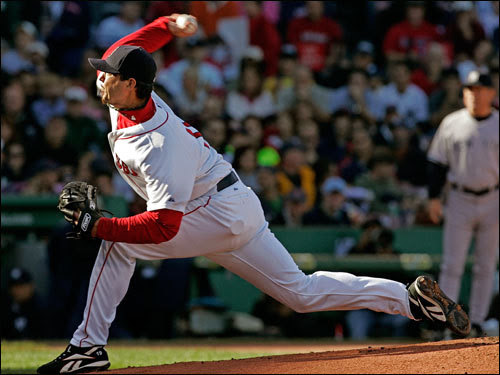 Josh Beckett brought "it" yesterday. If you were at the game or watching...you saw "it". I don't have to define or explain. Jackie MacMullan saw it. Even Mike Lupica of the New York Times saw it. Josh is going to be the next Cy Young winner or my name isn't TEX and I'm not the KickAss Chick of the F.Y. Brigade.
I caught the beginning of the game...saw Jeter's homerun....just muttered something like "shake it off josh...you're better than this" I left the house knowing it would be all ok. Afterall, I had the Commander of the F.Y. Brigade's tshirt on. Thank POD for true friends....my phone was blowing up with texts of all the runs scoring over the damn Yankees. Red Sox fans were in abudance at the ACL festival I was attending....I was happy to share the updated scores with as we high-fived. One Phillies fan leaned over and said I was sure brave wearing my team's shirt after the game on Friday. Brave I replied?? Why is it Brave I asked?? I mean I'm a die hard dyed in the wool fan of my boys...through thick and thin...good and bad....win or lose. I am a Red Sox fan. I don't root for my boys JUST when they win....I cheer them on when they are losing or having a bad day.
So today's game is about the Old Guys....a Battle of the Bulge if you will. This is a game that I hate to say I am missing. As much as my love for Roger existed for years...I hope he goes down in flames and sits his ass on the bench moping and sulking.
Posted by Tex at 10:32 AM 5 comments: 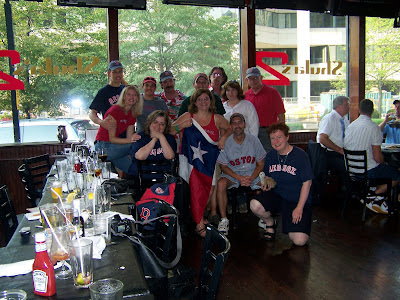 Well Gang, you've read about it, heard about it, waited for it....FINALLY it came....the SG Gathering. They descended upon Balmer at Schula's and proceeded to take over. and yah...that's a Texas flag...its mine. Stories to come...tonight I just need to veg. Ive had WAY too much fun.
Posted by Tex at 5:56 PM 10 comments:

The Red Sox arrived today in Baltimore ....to find out they were playing the Black Sox...well it was the Orioles, circa 1932. I discovered tonight courtesy of a poster on SG, Dover, that the Black Sox were a Negro league in that era. Very cool retro uniforms....and it was a good match. Our favorite OK well MY favorite EX Red Sox player, Millar hit a 2 run homerun off of Wakey...then Coco hit the same...I am much too tired to go over play by play tonight. Sleep is beckoning me....but ONE thing: Clay Buchholz won the game tonight!!
I will be on hiatus through Monday....Heading to Baltimore to meet up with SGers...Pictures will follow...some day :)
Posted by Tex at 9:56 PM 2 comments:

Deep in the Park at FENWAY!!!! Ladies and Gents....may I present to you #19...Red Sox pitcher Joshua Patrick Beckett....who completed his #17th Win of the Season!!!! Close game 5-3...but I assure you the boys were backing up JP, particularly the rookie Ellsbury going 3 for 3 with his 2-run homerun...a triple AND another Stolen BASE. This boy is Making his Mark in Fenway and seems to be interviewing for a permanent job here. Josh pitched 117 pitches and 7 K's. I can't tell you how proud I am. I am heading to Baltimore to see the boys play at Camden and meet up with a great group of Sox fans off the SG board and could NOT be MORE excited.
This year has been great enjoying the games with others who love the Sox as much as I do...but there's one thing that I haven't gotten to do yet.....attend a Sox game with my son, Josh. Yes I know....so maybe you understand why I have this affection for Beckett now....its more than just that he's a Sox pitcher and from Texas. Next year...the plan is for my son and I to take a trip to Boston to catch a few games together. Until then...we're getting to watch them together here at the house...a first.
Ted...if you're reading this...I hope you packed your camera and earplugs....you'll need both. :)
Posted by Tex at 8:45 PM 5 comments:

THAT my friend is Camden Yard....smack in the middle of Baltimore, Maryland. It's where the Orioles play ball. It's also called Fenway South affectionately by the Red Sox fans....well ok maybe not affectionately but out of in-your-face to the Oriole Fans cos they do NOT inhabit their own park. Also, it's the park where many of the SGers are going to have another Gathering. We are going to descend upon Camden in force...FULL FORCE!!! We are going to have a professional(ok well she's as good as a professional) photographer, someone with a badge(moi) and a lawyer nonetheless I believe....so if we get into some scandel, we'll hopefully get out of it or have a lawyer to get us out AND have PHOTOS of it all :) Stay TUNE PEEPLES :)

The game tonight??? Good PORD! I was like sitting back relaxing...hoping to just enjoy a slamdunk win with it being 10-1.....the next thing I know the floodgates opened for the pesky bluejays....DiceK came out in the 6th....Javy came in and out...MDC came in then out....Nails came in...NEXT OKJ...then finally in the 9th, Paps. The game ended with a W at 13-10...the good guys.

Lowell hit a 3 run homerun in the 1st! Lowell not only stole a base but he got 4 ribbies, went 3 for 4, and scored 2 runs!! THEN theres JD who got us 2 Sacrifice Flys, a run AND he did NOT strike out! The Rookie Ellsbury is making his mark...batted .393, 2 hits and 2 runs...and YET another DIVING catch saving us from Frank Thomas hit!! It's funny how we're not looking to Tiz or Manny to save us any longer...everyone is pitching in-no pun intended.

Just when we thought finally DiceK was getting his Run Support...the BJays showed us they had some too....but in the end Our Boys Defended Fenway and DiceK's honor.

The Future Face of the Red Sox 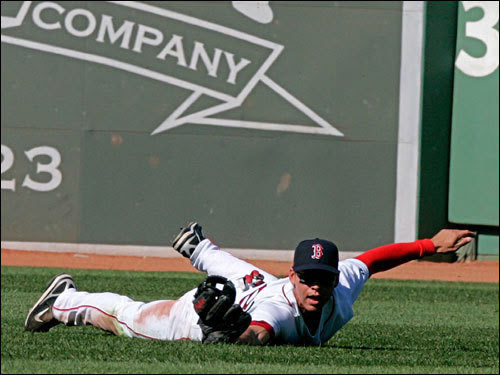 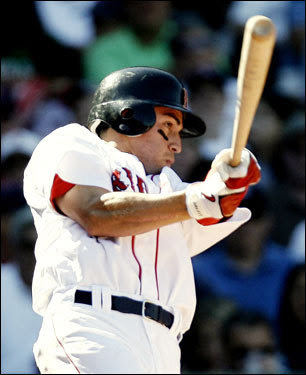 *pics courtesy of Boston Globe
Today Rookie Jacoby Ellsbury wanted to make sure that Clay was not the only one who made a statement to the front office and to the fans about how hungry he was to play here. His 1st Major League Homerun, a Diving Coco-esque Catch and a Stolen Base ALL IN TODAY's Game. The rookies are all wanting to show this September why they should remain in Boston and not be sent back to the farm. Now don't get me wrong....the farms are nice but city life brings much more excitement. We got the Win today with Lester pitching allowing only 6 hits and 2 runs in 6+ innings. And not to be outdone...Coco came in and made his OWN spectacular sliding catch!!
Six games up now...speaking of them....A BIG SHOUT OUT to our Haverhill Boy Pena again who got a 3 run Homerun off Roger's playmate to help the Devil Rays overcome and put those spanks back in their place.
Onward to Kill MORE BIRDS....
Posted by Tex at 3:53 PM 5 comments:

It's What Dreams are Made of 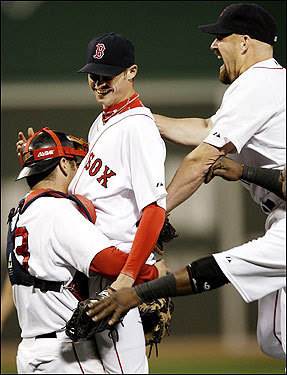 Credits: Pic at top off Boston Globe. Two others: sittingstill.com
and for those photo burglars....Please Give Credit where credit's due if using someone else's pics!
SOOOOOOOOOOO....
I watched the game till around the 5th inning....I had previous plans to go out with friends. I left forgetting to Tivo it...HUGE MISTAKE. I'm texting Cyn about none other things but Texas (big surprise I know) since Clay is from Texas and all. I get texted while out from HS and Hayes....giving me updates in code. Of course you cannot speak of the No-No going on....but I knew what 8-0 all zero's for the O's meant when hayes texted....all I asked was "is it over?" and "clay still in?" A "top of 9th" and "yes" respectively responses....so I waited.....text comes in "1 out" ..... then "2 outs" ....then of course TEXTING is just NOT good enough. My good friend Hayes calls me freaking out!!! I'm in this bar with music blaring but all I can hear is "Can you fucking believe this??" And I forgot to Tivo this. DAMMIT. Thank Pod for mlb and the globe's videos so I can watch highlights. I have 3 friends who were at the game...actually I think I have alot of other friends who were at the game too off another board. Kelly off SG has Stupendous photos and captures the giddiness of the event. I am trying to read every last article on it this morning. I cannot imagine what Clay's parents are feeling right now. This kid from southeast Texas, who dropped in the drafts because of the laptop incident he was involved with, showed Theo last night that he did not make a mistake in signing him. Clay showed his stuff last night and it was the stuff, as Clay put it, that you dream about.
I have a new Texan to wave my flag for.
Posted by Tex at 8:10 AM 1 comment:

Ok so today is September 1st KELLY :) and Thank POD IT IS!

Clay is returning to Boston and to the mound for Call-Ups. A few others will join him and the boys in our quest for for Red Sox October. Journeyman Corey will be joining the Relief Pitchers. Moss and Ellsbury will assist in the outfield while Clayton will help out in the infield. And I just learned that Lester is to be brought up as well. I hate the month of August. This weekend is Labor Day weekend...but I plan on relaxing and preparing for the jaunt in Baltimore where I will be meeting up with several fellow Red Sox fans off the SurvivingGrady site. I may not see Buchholz's full game tonight as I already have plans tonight...but there IS DVR. :)