Sometimes you're the Dustpan...Sometimes You're the Broom

Apparently, the Sox are learning to play a new game...it's called Broomball.  Instead of bringing bats, it's played with Brooms.  Ok, maybe this ain't the Sox actually playing but there is a game called BroomBall and they do play with Brooms.

The Sox caught fire this week and lit up the Angels melting their wings right off their backs.
4 Game SWEEP!    I'm not even gonna recap...cos I'm so giddy it's enough just to know we did it.
Posted by Tex at 10:30 PM 2 comments:

Apparently before gates opened at Fenway tonight, there was a bomb threat. Bomb Squad was called but nothing was found. Had they waited around till the xx Inning, they would have seen it...go right over the Monster where Ortiz hit it. Of course, Munchkin pipes up and laughs about it retorting "Bomb Squad?...they're early"  I think he had a premonition since he's been speaking up for Papi with all the haters out there.  Beltre hit a bomb as well and Lackey took down his former bosses making Scioscia cry like a baby in the dugout.

But the real story (if that wasn't story enough for ya)  the Red Sox were honoring Nomar on Cinco de Mayo day. Nomar's entire family was there along with several players he had played with at Fenway. 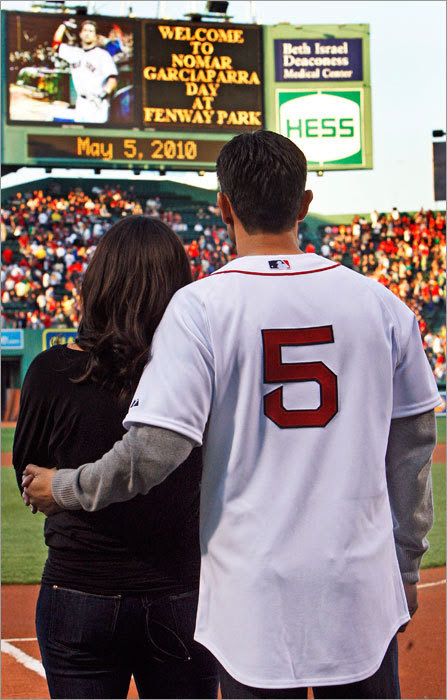 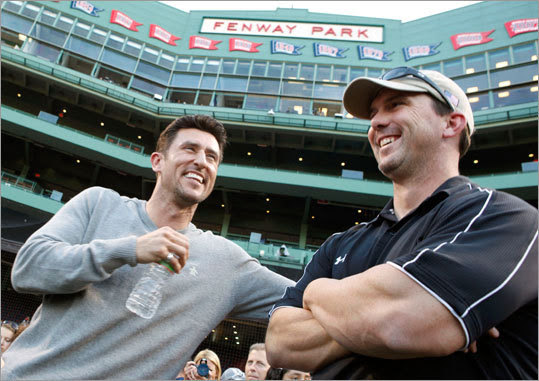 He got to throw the first ceremonial pitch and see some of his old buddies and we got to see Trot.
It was a sweet thing the Red Sox did this past Spring Training....signing Nomar to a one day deal so he could retire a Red Sox.  It was sweet and bittersweet seeing him....as he left on such awkward times but such an awesome year: 2004.  And although he did receive a World Series ring....it had to be hard for him to watch the team win it without him there.   Nonetheless, fans love Nomar...always will.
Posted by Tex at 11:09 PM 2 comments:

it really is DIRTY WATER

But then...the Red Sox came back into town dragging their slowasses into the clubhouse after getting embarrassed to high heaven at Fenway South.  You can read the stats and all the newspaper articles you want...I watched the game. And I wanna know what was said in the clubhouse this afternoon. I wanna know what they put in the water jugs.  Cos the team that played in Baltimore was NOT the team I saw tonight.

The Team tonight KICKED SERIOUS BUTT!!!!!!!!!!!!  I know...its just one game but they played the game I knew they could play.  And Beltre hit his first home run as a Sox!!!  and I CALLED IT!

Out with the Mold...In with the You

s
I was 'advised' to take down my profile pic on Facebook by a friend who said it wasn't appropriate and looked like a tramp stamp. Now I love this dear friend to death as we've been friends since 6th grade but it still hurt me that again....'the world' doesn't want us to really be ourselves.  I got on Facebook to have fun with my Red Sox buddies...next thing I know, I'm connecting with old high school friends.  I held my ground of the reason why I put it up there...it's baseball season and you're liable to see anything on my profile pic that I think will bring my team good luck. Today I put up my "Praying at the game" pic with my SG shirt on.  Now it wasn't because my friend suggested to remove my tat pic...it was because my team has been sucking loads lately.  So it got me to thinking this afternoon....if you were to have to select a 'mold' of yourself, could you pick one?  One single item that explained you...your life....your heart....your soul....Could you?  I'm throwing up this boot chocolate mold because I LOVE Cowboy Boots.  LOVE THEM. I only have two pairs...but I want way more.  I don't need tons of heels like most women...I want Boots and not the fancy 'copycat' 'wannabe' cowboy boots...I want the real thing.

so then I had to figure out another one....the Running Horse....free spirit....strong....standing up to anything that comes it's way....and Running Hard to get to somewhere. Still not sure where but Running.
I've been focusing on my goal of the company I work for to focus on being gender responsive with the girls we house in the juvenile facilities.  Society has tried to put females in a mold...in their place.  Problem is...I never listened.  I challenge all of you, female or male, to not put your life or yourself in a mold.  Be Yourself....Authentic Self.
I love my dear friend still...and I'm over it...but it did cause me to think.
Posted by Tex at 6:26 PM 2 comments: