Nothing says I Love You like leather and seams.
Posted by Tex at 11:51 PM No comments:

The Calm Before the Storm: P & C

People ask me what I do in winter when there's no baseball.  I'll tell you what I do.  I stare out the window and wait for spring.  ~Rogers Hornsby 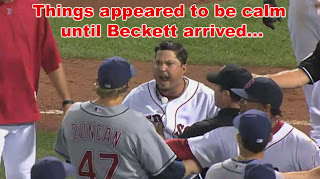 I think if you talk to most die-hard baseball fans, they'll tell you the same.  But the key to the above quote is "When does Spring Begin?"  I can tell you what the calendar says (Some time in April? Pfffffffffft is what I say) or if you're a true fan of the game on the diamond, you know Spring begins today.  The day when men turn into boys and take the field to throw the ball and catch the ball.  Cleats are put on. Practice uni's on. Reacquainting and Introductions are made.  There won't be games for at least 2 weeks but fans will be lining the field watching our pitching: Lester(our new Top Gun), Beckett (will he or won't he step up this year? and might I add newly married to a Rocket Scientist), Buchholz (Our Other Top Gun & a new father), Lackey(let's hope he doesn't lack luster), DiceK (show me the ERA since you got the money now), Papelbon(shut up and pitch), Bard(your next closer *I hope),  Jenks and Wheeler (newly signed and I'm sorta psyched about both!), and there's Wakefield, Doubront, Tazawa, Atchison, Bowden and Okajima ...anyone else??  But wait, there's more today....today the Catchers show up too: Tek returns along with a newly signed Jarrod Saltalamaccchia.  Then Exposito and Wagner rounds it out.  Kids are lined up hoping for an autograph of their favorite player.   The media asking every obvious and stupid question they can think of.   The sun is shining while snow lingers on the ground in New England while they wait for Spring to come.  But in Florida Spring is here....the groundhog has come out of his hole....Pitchers and Catchers take the field in Fort Myers preparing for Spring Training which has become a vacation spot for many baseball fans.   And although there are many questions wafting around in the back of everyone's minds and souls about our team and season this year, my burning question is "When will Beckett let out his first curse word and when will the first F-Bomb be dropped on unsuspecting ears?"
Posted by Tex at 10:06 AM 1 comment:

The Pedal to the Metal

*picture taken off Boston Globe Truck Day 2010*
Once every year staff at Fenway gather up all the equipment necessary (and some unnecessary-anything players or managers request) to practicing at Spring Training and load it all up into a huge 18 wheeler truck to make the drive to Ft. Myers, Florida.   The crowd who decide to come to watch this event is special.  They are die-hard Red Sox fans who not only love the team, they love Wally, they love Fenway, they love the entire process and embrace the Sox as being the fabric of Boston.   They've waited through a long hard cold wet snowy frozen winter this year for this.   Sure some of them followed the Pats...but since the Pats were out of the play-offs...they've longed for this day.  It's the first of the Countdowns for Baseball.   For once that truck leaves Boston, baseball is on it's way.  I've never been able to attend but have a few friends who have and I'm quite sure some of them will be there once again in the morning.  Wally will be there riding in the back of a low boy throwing baseballs out to the crowd along with the staff.   This event is like a parade now....I mean the entire staff is back there throwing stuff to the crowd...Wally is waving....some bring signs wishing them luck or a good trip...pictures are taken....then the Truck pulls away for the long drive to Ft. Myers to join the boys who are on their way.  (Hmmmmm, maybe that'd be a job I could apply for?) Some of the boys have already showed up this year....but soon the whack of leather against wood will be heard for miles.
This ritual that will be performed in the early hours of tomorrow morning in Boston is lovingly known as "Truck Day".
Posted by Tex at 10:22 PM 1 comment: