Moving ON UP....on the East Side

***all pictures taken off of Boston Globe used without permission***

On Monday, we were in Last Place.  Today we're in 3rd....the boys are on a west coast swang thang and hitting it hard.  We've won 8 out of the last 9 games.....DiceK has went all GodZILLA on the teams and Jed Sox is leading us to freedom.  Muy Grande Winner Joshua Patrick is back...Joshy is gone.  Lester's getting closer to May and feeling good.  Heck even Carl's starting to hit.  Today Lackey is on the mound....facing whoever that team in Anaheim is.  Happy Easter to my fellow friends who Believe.  And Happy Sunday to those who don't.  Either way...I love all of you the same.  Now

Objects in the Mirror are Closer than they Appear

We have an old saying in Delta House: Don't get Mad, Get Even 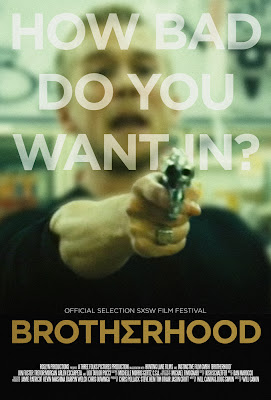 Last Year at SXSW, I attended this film....it's a movie about fraternity hazing gone wrong.  I know you're thinking Oh GREAT....some dorky Animal House wannabe but it is FAR from Animal House and I'd suggest if you get the chance to ever see it, DO.  But this poster for the film just really speaks to me about our boys...hazing is all about seeing how bad boys want into a fraternity....to what lengths will they go??  So maybe this whole losing streak is a hazing of sorts....to test them.....to test us....just how BAD do the Sox want it?  Do they want to win?  Do they WANT a pennant? or another World Series?   On paper they appear to the The Team to beat....but on the field they've been The team that GETS beat...senseless sometimes.  Yeah I know we took the Yankee series but there are about 5 more of those I think and if we continue like this, I'm not sure we'll take the rest of them.  We are 2-9.  TWO WON and NINE LOST!!!

But I'm going to remain faithful and keep watching and rooting for them. WHY?? Because they are MY Team.  They are YOUR Team.  The Red Sox are Boston's TEAM and we should be Behind them rooting for them.  You want to yell at someone???  Yell at your neighbors when they're slamming doors or playing their music too loud.  Yell at the idiots who cut you off or the cashier who shorts you your change.  Yell at Mother Nature for not bringing Spring early.  Yell at the dang jurors who didn't find Bonds guilty of ALL charges.  But do NOT YELL at the Red Sox or Boo Them.....Just ask them....HOW BAD DO YOU WANT IT?
Posted by Tex at 12:16 AM 2 comments:

Someone PLEASE Light The Fire

It all begins with a strike of a match .....it's a simple act.  Very deliberate. With Purpose and all the elements just follow the lead. One after the other ignites. Each feeding off of the one before.  Fiery and blazing. Burning with desire and anything that gets in it's way is annihilated.

Lighting the fire seems easy......keeping the flames going is tougher.  If you're good at stoking the fire you ends up walking away from the embers you left behind.

Now if we can just get the Red Sox on board with this Philosophy and Way of Thinking
Posted by Tex at 11:48 PM 1 comment:

From The Executer to Can we Execute Him?

Beckett set us up.  He drew us in with that fabulous magnificant performance Sunday night....just so we could be sucked down the proverbial drain with Dice-K.  All the talk about if anyone would be booing or cheering for Johnny as he returned to Fenway with the Rays....but when in reality the Boos would be reserved for the implosion coming from the pitchers mound when the Sox took it. Johnny started it off with a Dinger into the bullpen in the 1st inning....and if that wasn't enough by the end of the 2nd inning the Sox were trailing 7-0 with the help of some Elmer Fuld (Sam Fuld to be exact) rookie playing for his first MLB game.  Thank GOD Tito didn't wait around past the 3rd and brought in Wake. (never thought I'd say that).  Tomorrow is Lester and I'm just praying Lester thinks its May or June or September...and the bats from Friday or Sunday show up cos quite frankly I NEED a Winning team in my life right now.
Posted by Tex at 10:18 PM 1 comment: 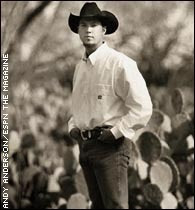 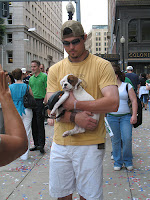 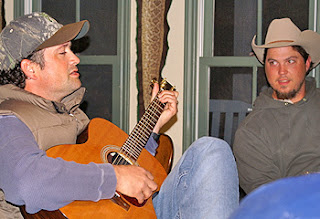 Then there's the man who loves a good party and hanging out with his friends.  Maybe even listening to some tunes of a country singer.

But when we think of Beckett, typically this is the one we like to think of  (I think they're missing one of the K's) and tonight we had a time machine moment where Vintage '07 Beckett stepped out onto the mound and gave us a performance that rattled ole George's bones.  The Opening Day Win was awesome and very much appreciated by the fans.....but tonight's Win.  Tonight's Win was Magic. It was like Beckett took on this western persona of good versus evil...strapping on his gun for hire and lacing it down his thigh tightly while fingering the trigger waiting for a reason to finish off anyone who got in his way.  Joshua Patrick came to town looking to end this silly rumor that the Sox weren't in it to play.  That the team on paper was just an illusion. a fantasy.  We've been looking for a hero in one of the pitchers to step up and show us how it's done.  Make the Yankees shut up and go home.  8 innings. Shut-out. 10 K's later.  All we needed was Wild Thing to come in and mop up  the floor. 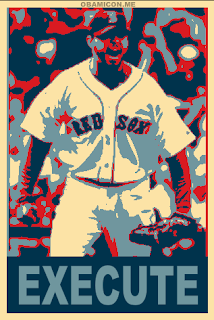