Do Not Let the Size Fool You

I'm 5'2    and 1/2".  Yeah I claim every single 1/2 inch of stature but NEVER let my size fool you in what I am capable of.  I will stand up to a man of 6'4" and call him a 'Dick' if that's what he deserves.  Dynamite comes in small packages and up there in the Rocky Mountain High area, I think they got a taste of it as well.  Pedie saved Paps ass BIG TIME last night by dinging his last home run to put us back over the Rockies after Papelbon was playing rock-paper-scissors with every at-bat.  Extra Innings with a west coast game that takes biting your nails to the extreme....I'm dragging here today trying to focus on work. So I figured if I wrote a little diddy about the game, I'd get it out of my head and perhaps get something done. 5 for 5 and 3 Home runs with 3 Runs and 4 RBI's.  Last night. Apparently the last Red Sox player to hit 3 Dingers in one game was Millar in 2004.  I love these sort of stats because it shows you not to underestimate the players who may not appear to be a hero of a game.  I'm sure if you ran into Dustin on the street at Sullivan's or Dunkin's, you may not even recognize him cos....or maybe you would cos with his personality (after reading just some of his book I get the jest he is a smack talker in general), you could possibly overhear him talking smack to the girl behind the counter on how many donuts he could eat in less than 5 minutes or how many tires he could change in less than one hour.  He's a competitive little dude....but don't let him know I called him little.   But as you can see, JB definitely leaned 'over' so he wouldn't be taller than Dustin.

It was told that Dustin was heard chanting as he walked by Papelbon in the locker room last night "Who's Your Daddy?" **

**Ok maybe that was made up but it sounds like something he would do...and I'm willing to bet my Red Sox tickets in Texas that he did.
Posted by Tex at 9:09 AM 3 comments:

Reason I fell in love with Baseball

College Baseball....more specifically College World Series.  Sometime back after leaving high school and heading to college at Lamar University, I fell in love with baseball.  I admit it was the boys I was following at first....but at some point, my focus shifted from adoring the seat of their pants to the way the ball sailed across the plate meeting metal with leather then watching the ball make it's way over the shortstop's head to outfield...all the while watching the batter run his ass off to make it a double.

LSU isn't in Omaha...so I'm not as invested to watch BUT (there's always a but in baseball-pun intended) Texas is...no not THAT Texas team....TCU, Frogs, Texas Christian University.  It's the last year at Rosenblatt...I'm sad I never got to go before they move it to the new park....but I'll get there one day. 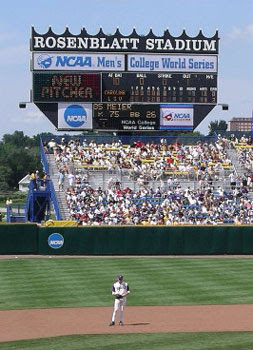 TCU vs UCLA tonight...Top of 7th and the Frogs had a great big ZERO....just seeming to have No chance when Boom. Got one hit and man on First.  BoomBOOM Man on 1st and 2nd.  BOOOOOOOOOOOOOM. Bases loaded.  Unknown player to me...gets up to bat and gets a piece sending it right down the middle out to Centerfield....TRIPLE bringing the score to 5-3.  Bottom of the 7th brings a solo home run for the Bruins

Now it's the top of 8th and Frogs are up again. Let's hope the Frogs can pull it off. But there's Double Elimination so the Frogs are still in it even if they lose tonight.

A Funny Thing Happened on the Way to a Forum... 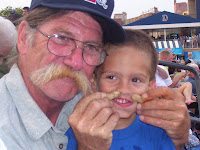 As we meandered around and met family and friends of AB, it became clear to me that AB was loved by many. Watching his two sons and listening to friends talk, looking at pictures of AB through his life, I felt finally I was getting to know all of the other compartments of Andy. When it came time for speeches, I was choking back tears just listening to heartfelt stories and memories. But of course BB pulls an Andy and calls out us SGers to the crowd(explaining "us") and asked if we wanted to say something.  I knew Ted couldn't cos he'd be a blubbering mess. I thought to myself "please someone open up their mouths!!"  when Hayes quips "Ya know, we're just good at one liners"
A storm had blew in with lightening all around and wind and rain blowing all around.
As quick as the storm had kicked up earlier, a calm came across the water when someone exclaimed and yelled "Oh my Gosh...Look outside! Andy!!"   We all turned around and looked out across the bay at this marvelous rainbow.  Although I find rainbows very beautiful and meaningful...I didn't understand the sense of wonder most seemed to be feeling.  But then it was explained. Andy loved Rainbows....he loved Rainbows before they were popular and all. So it was like Andy showed up for his own Memorial Service to say Good-Bye.
To me the evening with the storm and rainbow was akin to both sides of Andy; his crotchety side and his softer side. Andy left quite a legacy behind instead of leaving footprints.  I'm raising a glass to Andy

Rethinking this entire weekend on my return flight(of which where I wrote this post), it occurred to me a funny thing happened on my way to a forum.  I made lifelong friends who continue to impact my life daily, challenge me to question my actions and motives, and help me to continuously realize relationships are what matter most in life and I've really come to love New England as much as I love my great home state of Texas.....Not that there's anything wrong with that.
Posted by Tex at 11:32 PM 2 comments: