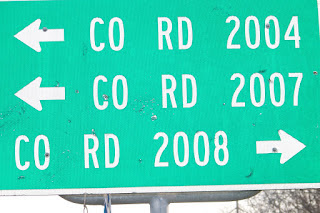 They say you can't go back home....well I guess you could use that same adage in going back in time. I've been passing by this sign for quite some time now since I started my new job up near Ft. Worth. It's on Hwy 121 outside of Glen Rose....I saw it the first time in November...although I had been passing on this same road numerous times. We had just won the World Series again for the 2nd time in 4 years....at first I thought it was funny how the sign had 2008 arrow towards the future (ok so it doesnt SAY future but it looks like that to me). Then one day it hit me....the arrows were pointing back in time for the years 2004 & 2007...and pointing to the future for 2008. I mean I am a person who really reads into things...the simple things. So I am predicting it now. 2008 will be another monumental year. I know we will make the playoffs...I have no doubts. I think we will be in the World Series...Bets are made. Not too long after discovering this sign...I had been admiring this sign of a ex-Red Sox player's face in Valley Mills...he wasn't someone who was in the show a long time...but anyway...I had been seeing this sign with his face on it next to a little league park...I figured he'd donated to it....all of a sudden one day I turned to look at the park and could NOT believe my eyes. 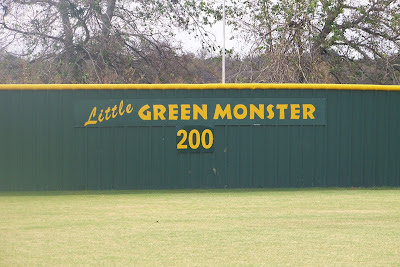 This is in Texas...in a little small town in Texas...that I pass every time I drive to one of my company's offices. Call me superstitious...but I take signs for real. I look for big things this year.
Posted by Tex at 9:06 PM

I'm a bit of a superstitious sort myself, and that is just weird. I believe, Tex.

How did you take that picture? Were you driving or did you pull over to the side of the road so everyone could wonder who the maniac was? ;)

I pulled over on the side of the road doofus. I was in a dress and Im sure all the trucks passing me were wondering what in the HAYEL I was taking a picture of.

They were honking at you Tex. You know, the trucker version of the wolf whistle.

All right, this lightweight has GOT to get to bed.

Better get a new lock, Tex.

How I've escaped this pimpage so far I have no clue.

I dont need no steenking lock! Ill kick his ass if he dont watch out.

Royal Rooters said...
This comment has been removed by a blog administrator.
9:57 AM

Tex, great sign. I guess it will have to be changed after we win the 2008 WS (maybe just photoshop).

I propose that the CO RD stands for Championship Opportunity, RedSox Deliver!

Bronx Liaison said...
This comment has been removed by a blog administrator.
3:44 PM

I spoke too soon, Tex.

Oy vey, this is like middle school all over again.

I see signs and connections too...your discovery was quite a find!

Or Drive Thru Liquor Store-Exit Here.